Monday is the Labor Day Holiday

“An educated person is one who has learned that information
almost always turns out to be at best incomplete and very often false,
misleading, fictitious, mendacious – just dead wrong. ”
―  Russell Baker
Legal Scrutiny for LAUSD
The L.A. County district attorney is looking into possible wrong-doing in regards to LAUSD food service mismanagement, improper spending and ethical breaches.  The district ordered an internal audit and an independent investigation of the situation and turned the findings over to the D.A.’s office according to a story in Tuesday’s L.A. Times.   LAUSD Food Services Director David Binkle left his position last month.               An internal investigation by the LAUSD looked into the district’s recent technology policies and initiatives and the findings were not favorable and that’s being kind.   An article in yesterday’s Times highlighted the report’s focus on problems with the “i-Pad-for-all” program, campus internet access and utilization of online curriculum.   “The analysis shows that serious challenges have persisted with technology in the L.A. Unified School District,”  the paper notes, “including limited classroom use of iPads and other computers, inadequate support for teachers and partial or inconsistent access to the Internet.  The researchers also found limited use of online curriculum provided by Pearson, for which the district purchased a three-year license, at the added cost of about $200 per device.”
College Recommendation Letters
If you have worked with high school seniors  for any length of time [Ed. note: I did for 26 years], you have, no doubt, been asked to write college letters of recommendation for your students.  As the author of this piece in EDUCATION WEEK points out, the request is “both an honor and a responsibility.”  She is certainly well prepared for the topic which she writes about: “13 Tips for Writing College Recommendations That Rock,” as she is a teacher of writing and journalism in New York City, is National Board-certified and the New York Director of the Journalism Education Association.  “Writing recommendations isn’t always easy though,”she admits.  “You have to be honest and convey the student’s best attributes without making it read like a template.”  Her suggestions are quite specific and helpful and should prove valuable if you are writing those letters now or possibly in the future.
Corporate “Reform” and Privatization
The American Legislative Exchange Council (ALEC) has been one of the organizations at the forefront of the movement to privatize public education.  Through its model bills and conferences that bring together corporate interests and conservative, mostly Republican state legislators, it has consistently pushed an agenda of school choice, charters and vouchers. Wisconsin has been one of their more successful battlegrounds as described by that state’s Democratic Assemblyman Chris Taylor in a commentary on The Center for Media and Democracy’s PR Watch.                 “The Wisconsin government has slashed funding for K-12 public schools while expanding and enriching the state’s voucher program.  This is a clear-cut victory for ALEC, the corporate-funded lobby for privatization,” comments  Diane Ravitch’s blog  about the above item. . . .    “Way to go, Scott Walker, in meeting your goal of destroying public education.  Way to go in destroying a historic democratic institution.”
Common Core and Testing
The Common Core aligned testing season for students was this past spring.  Now it is test results announcement time and the news is not all that good and that’s being optimistic.  The headline from this piece on the  abc NEWS website (via the AP) pretty much sums it up: “Initial Common Core Goals Unfulfilled as Results Trickle In.”   Results from 7 states that administered the SBAC assessments are mentioned and those are the exams California uses.   “Overall, the statewide scores thus far are not as stark as first predicted,” it points out, “though they do show that vast numbers of students are not proficient in math or reading.”  Be sure to read the quote from the LAUSD official regarding the scores and how they will be explained to parents.                 Some encouraging news for California can be found in the latest AP (Advanced Placement) test results, according to an item in yesterday’s L.A. Times.   “Black and Latino students in California who passed Advanced Placement exams outperformed their peers elsewhere, but a gap persists between them and their white and Asian counterparts,” it begins, “according to new test score results.  In addition, the number of underrepresented minorities — black, Latino and Native American students — who took the tests is higher in California than elsewhere: 38.9% of test takers in the state compared with 26.2% of all test takers, according to 2015 results from the College Board.”  This piece contains some specific numbers regarding AP participation and results for the LAUSD.               How are students in the Golden State faring on the SAT?  Based on another story in yesterday’s Times, they are doing slightly better than their counterparts in the rest of the country.  “In California, 241,553 students — 60.4% from the graduating class of 2015 — took the test,” it notes, “and, on average, they scored 1,492 out of 2,400 points.  Nationally, the nearly 1.7 million test takers scored an average of 1,490.  California’s average score is about 28 points down from 1,520 in 2006.  The newer scores reflect what College Board President David Coleman called a ‘larger and more diverse group of students than ever before.'”   This graph accompanied the Times article: 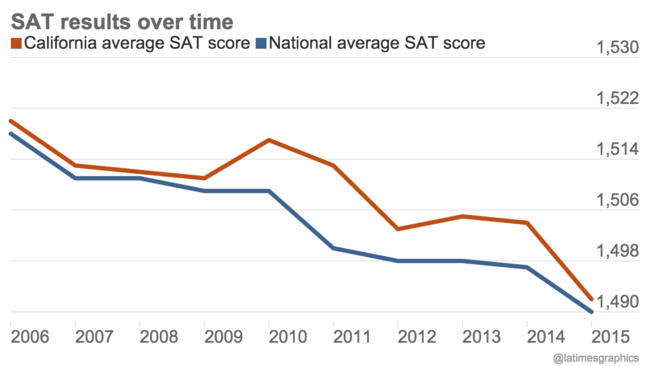 ALOED, Alumni of Occidental in Education
That’s me working diligently on the blog.

Our present education is geared to industrialization and war, its principal aim being to develop efficiency;
and we are caught in this machine of ruthless competition and mutual destruction. If education leads to war,
if it teaches us to destroy or be destroyed, has it not utterly failed?”

―  Jiddu Krishnamurti ,  Education and the Significance of Life

Testing
Are student teachers the latest casualty of standardized testing?  That’s the issue taken up by a guest on Valerie Strauss’ “Answer Sheet” column in The Washington Post.  The author is an assistant professor of psychology and education at Mount Holyoke College in Massachusetts.  “As children return to K-12 classrooms, some will find that the emphasis on standardized testing that has caused stress for teachers and students now has a new casualty: student teachers.  Teacher education programs around the country are beginning to feel the impact of testing standards, as master teachers pull back from their traditional role as trainers.  Many of them feel that the pressures of ‘teaching to the test’ mean they no longer have time to manage new teachers in their classrooms,” she points out.  “A future when seasoned teachers are no longer able or willing to mentor pre-service teachers due to testing and teaching constraints is a grim prospect.  This situation does a disservice to student teachers, teachers, schools and, most importantly, children.”  The author proceeds to further delineate the problems and offers several teacher preparation programs, including one at CSU Fresno, that are dealing with it.                 The last defendant in the Atlanta test cheating scandal was sentenced today by the judge presiding over the case.  The “District Dossier” column for EDUCATION WEEK provides the latest details and briefly reviews “what experts think is the longest and most complex academic misconduct case in U.S. history.”
Guns on Campus
California law has banned guns within 1,000 feet of any public or private school since 1995.  It includes an exemption for concealed weapons when the owner has a permit to carry them.  The State Senate has already passed a bill that would change the law and the Assembly is scheduled to take it up soon.  An editorial in Sunday’sL.A. Times has some suggestions for making the law better and details some of the political maneuvering taking place behind the scenes.  “[The] bill would end the campus exemption for all people holding concealed-carry permits, while granting the top school administrator the power to make case-by-case exceptions,” it explains.  “It would end the exemption on school grounds only; people with a concealed-carry permit would still be allowed to bring their weapons within that 1,000-foot zone around elementary or high schools . Current exemptions would continue for police, security guards and others armed as part of their work, as well as for existing shooting ranges on campuses and for theatrical productions.”
Kindergarten
It’s probably been a long time since you attended kindergarten and what is being offered nowadays is vastly different from what you may dimly recollect.  The current curriculum is now aligned with the Common Core and some programs now keep their charges all day.  Attendance in California is still not compulsory and an editorial in yesterday’s L.A. Times argues against changing that law. “Making kindergarten compulsory for all children, as proposed this year and in the past by the California Teachers Assn., is a bad idea.  For one thing, it’s very expensive, costing at least $200 million a year, mostly to hire public school teachers.  (No wonder the union likes the idea so much,)” it rather snarkly points out.  “Furthermore, it’s unnecessary.  According to the California Department of Education, 93% of the state’s 5-year-olds already attend public kindergarten — about 500,000 children.  Others attend private kindergarten and still others go to kindergarten a year later, at age 6, because they weren’t developmentally ready the previous year.”                If you don’t remember your kindergarten experience (see above) you certainly won’t recall your “expanded transitional kindergarten,” especially since it didn’t exist or at least it wasn’t referred to like that until very recently.  The same Times paper as above has a “Q & A” feature on the LAUSD’s expanded transitional kindergarten program that began in 2010 (that’s why you don’t remember it).
Opt-Out
And finally, last month the New York State Education Commissioner Mary Ellen Elia was threatening to withhold federal and state funds if districts in her state had too many students opt-out of state testing.  She apparently flip-flopped on that position in a recent interview with NPR station WAMC in Albany stating “parents ‘absolutely’ have the right to opt their kids out of state standardized tests,” the segment notes, “but she says she still wants to talk to them to try to bring them back to the fold.”  You can read an edited transcript of the interview and/or listen to the audio (3:07 minutes).